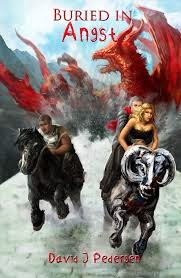 After reading David J. Pederson’s first book, Angst, I knew that I would have to read the second one, Buried in Angst.  The focus of the book, a character named Angst, is a former file clerk in the Kingdom of Unsel.  As he entered midlife, he decided that there had to me more to life and magically became a knight of the kingdom with the help of a huge sword that only he could weild.  Thanks to the symbiotic relationship with Chryslaenor, the magical sword, Angst manages to save the kingdom of Unsel.  Anyone would think that that would be enough to solve a midlife crisis.  Angst should then be able to live happily ever after right?  Nope, the kingdom is once again in peril.

While angst is looking forward to a life of celebrity, telling stories in the pub, continuing to incessantly flirt with every female he sees, and settling down with his pregnant wife, Heather, there is trouble brewing out on the frontier.  An entire city has disappeared into the sea and guess who Queen Isabelle sends to find out what has happened.  Yep.  So Angst and his crew are dispatched to find out what has happened and try to figure out what to do about it.

But there are a few problems that he has to deal with.  The special relationship with Chryslaenor has been broken and Angst is slowly dying without his foci.  The princess Victoria decides to tag along to help Angst, and the biggest problem is that the elements of Erde are warring with each other as they do every 2000 years.  And if that isn’t enough, Victoria’s cousin, Alloria arrives on the scene and manages to replace Victoria as the heir apparent to the throne.

In an attempt to aid Angst and keep him from dying, Rose, a powerful warrior and strong companion to Angst, tries to bring Chryslaenor to Angst and turns up missing.

While I thought Angst had found himself facing an unsurmountable problem in the first book, it seemed even more so in this book.  The elements of Erde, earth, fire, water, and air fighting it out and humans are completely powerless to stand up to the threat, all except for Angst and his troop minus Rose.  But when he returns home, he’s going to find that things have taken a very bad turn indeed.

David proves with this second installment in this series that he is not just a flash-in-the-pan indie auther with only one hit under his belt.  The Angst series is a strong work that is a great way for someone who is not familiar with the fantasy genre (like myself) to be introduced to a new world of reading pleasure.

While Angst was great, Buried in Angst is even better as David seems to be more comfortable his writing style.  I really appreciate the language of Angst (both books), the characters speak in plain language while David’s descriptions of places, people, and foes allowed me to easily visualize the setting.  The to darkne of Buried in Angst is definitely darker than it's predecessor, but not so much so as to be outside of the established parameters and allowing the sense of humor to be lessened.  This is NOT a comedy, but there are comedic elements that help to keep the tone light and yet still allowing for a darker plot.

Angst himself, is a strong character.  While reading, I often found myself wanting to just tell him to turn around and run, but he is not only strong and honorable, not giving to temptations that would test any man’s metal. 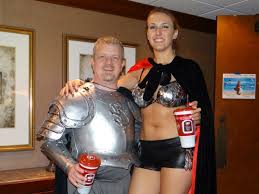 I highly recommend Buried in Angst, as well as it’s prequel Angst.

I am also looking forward to the next installment of this series that David is working on now!