The Rain Never Came By Lachlan Walter - Outstanding Post-Apocalyptic Sci-Fi From Down Under! 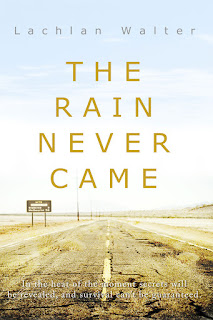 To be completely honest, I honestly cannot remember how I heard about this book. I think it might have appeared on my Facebook feed at some point while I was in the middle of another book for the new podcast I am involved with, The Orbital Sword. In any case, I had no idea what to expect other than knowing that it is a post apocalyptic Sci-Fi novel by an author from Australia. Being I love this kind of story, I thought I would give it a go.

The Rain Never Came is set in the state of Victoria, Australia, near the town of Newstead, apparently some time in the future where there is limited supplies of food and water to sustain life. While there is no reason given for this situation, one can only assume that it has something to do with climate change because the drought has apparently lasted for decades according to the main character, Bill.

The story begins innocently enough as Bill watches a football match being held in a stadium that is falling to ruin. Bill is soon joined by his best mate Tobe. They talk for a while and then there is a post-game gathering at the local pub. Sometime that night, the people at the pub, including Bill and Tobe, see some strange lights off in the distance and many hope beyond hope that it is a sign that rain is on the way. There is no rain and Bill gets so inebriated that Tobe has to take him home.

The mood of the book darkens a bit when the story turns to describing how Bill goes about his daily chores on the property that has been in his family for many years. All of his efforts go toward gathering food and water in traps he has set on the land. There is nothing growing on the property with the exception of a single rose standing in tribute to someone that has passed on and is buried on the property. Bill makes sure that the rose gets plenty of water every day whether he has enough for himself or not.

On the morning after the football match, Tobe arrives at Bill’s place and convinces him to go on a little adventure to find out what the lights in the distance were about. It is going to be a long trek across the bush where there are potentially many dangers including being caught by the “Creeps,” better known as the Compulsory Relocation Police, or CRP for short. Being caught by the Creeps means that one loses his freedom for sure, but there are also many unknowns which would make getting caught an undesirable thing indeed.

Bill and Tobe do learn what the lights were about and it isn’t good.

There is a lot that I liked about The Rain Never Came, but I particularly enjoyed the banter between the two main characters. The story is told from Bill’s point of view. He and Toby are Mates, which in Australia seems to mean far more than friendship. In spite of what Bill thinks or wants, or actually has the desire to do, he has been called upon to help his mate, and does so, but not without complaint. The back and forth between him and Tobe is mostly in jest and good nature, that is until Tobe reveals a long held secret.

Tobe is quite the fascinating character in his own right. He is a tough character, bushman through and through. Very little seems to bother him as he leads the way through the adventure. I sure wouldn’t want him against me.

Another thing I really enjoyed about this story is how Walter sets the mood of the piece. After the football match, we get a picture of people that are hoping against hope that things will get better. They want to hang on to what little they have, but everyone has a breaking point, except for Tobe, of course. Then there is the ever present threat of the Creeps coming in to mop up stragglers and take them off to the camps.

The pacing of the story starts off quite slowly, adding to the mood of the work. While it isn’t a very long book, it seems to take longer than it actually does to read because of the setting. I am not saying that it is slow or boring, but rather that it helps to illustrate just how difficult it is to survive in that world, and how the people have accepted their situation and learned to adapt and survive.

I give my highest recommendations for giving The Rain Never Came a look. It is a heck of a story by an author who can communicate ideas clearly and hold a reader’s attention.

Dr. Walter tells about himself on his blog…

“I am a writer, science-fiction critic and nursery-hand (the garden kind, not the baby kind), and have completed a PhD that critically and creatively explored the relationship between Australian post-apocalyptic fiction and Australian notions of national identity. My debut novel Bone Dry is coming out soon from Odyssey Books, and I also write criticism for Aurealis magazine and review for the independent ‘weird music’ website Cyclic Defrost. I am currently writing both a post-apocalyptic western and a book-length story cycle that aims to take giant monsters seriously. I love all things music-related, the Australian environment, overlooked genres and playing in the garden.”

check twitter for notifications of updates to this blog.