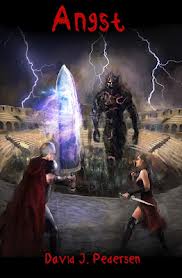 As far as I can remember, this is the first fantasy novel I have ever read.  As the title of my blog would indicate, I am a fan of sci-Fi.  If you are a regular reader of this blog, you know that I have been strictly sci-fi from the beginning.  So why am I reviewing a fantasy novel?  It’s just that good, that’s why.  I have weighed in on what I feel are the differences between sci-fi and fantasy in an earlier post, so I’m not going over that ground again.  I have heard and read that sci-fi and fantasy are related in that they fall under the umbrella of what is called speculative fiction.  So now I feel justified in including this review in my blog.  Oh, and I will not be changing the title of this blog to Jim’s Speculative Fiction Blog because it is too hard to say and to remember.

I met the author, David Pedersen, this past July at the OSFest 6 convention in Omaha.  It was very briefly and at a distance as he was serving as a panelist and I was in the audience.  When I got home from that con, I looked up a few of the people I met on Facebook and sent friend requests.  David was one of the people that accepted.  I had no clue that he was an author until I read some of his FB posts and thought I would give his book a try.  I am not disappointed.

Angst is a 40 year old file clerk in the kingdom of Unsel, which is currently being ruled by Queen Isabelle.  His lifelong ambition was to become a knight so he could make his mark on the world and perform great deeds and be remembered as a hero.  Just as he felt his opportunity slipping away with his “advanced” age, he found that he was able to wield a sword, but not just any sword.  His sword is called Chryslaenor and is full of power.  It is a grotesquely large and awkward looking weapon that influences Angst by making him a great warrior, but he has nothing to do but enjoy a degree of celebrity.

Among his talents is his ability to charm women of all ages and stations.  He is a hopeless flirt who uses his talent to befriend the Princess Victoria, much to the chagrin of Isabelle.

An unknown problem has halted trade between Unsel and other kingdoms and Isabelle hatches a plan to send Angst and several others on a quest to find the problem, and report his findings to the crown.  While on his travels he faces numerous seeming impossible situations.  Angst is accompanied on his adventure by several characters that add much depth to the story, including a person named Rose, who is a levelheaded powerful warrior in her own right, and seems to be the only female Angst meets that is not vulnerable to his flirtatious ways.

Poor Angst is just a man who is going through a mid-life crisis, but unlike many of us in the same situation, he has an opportunity to realize his dream of being something more than a file clerk.

One of the things that really appealed to me in this book was the tongue-in-cheek style of writing David uses for his story.  While I would not call it a comedy, it is loaded with humorous exchanges between characters and in the prose, which do not get in the way of the story.  In many instances, I found hints of language that might have been used by Douglas Adams in turns of phrases.  It was also interesting to me how the author used some wordings that I would call native to Wisconsin where he is from.

The story itself moves from place to place smoothly and starts out slowly and ramps up to a breakneck pace in the last several chapters. There is no wasted space in the book as every page is filled with information that is important to the story, and descriptions of scenery, people, and unusual creatures.  It is well put together and easy to read.  One thing that I worried about was that there would be a lot of terminology that I didn’t know the meaning to, but this is not the case.  This story is accessable to any reader whether one is familiar with fantasy or not.  I am glad that Angst was my first fantasy book, it was a fun read and I give it high recommendations.

Angst is available in paperback or in electronic media.  I got mine from Amazon for the Kindle.