Entropy: A Novel by Michael McGinty

I received a copy of this book for free and am leaving this review voluntarily.

The story in Mike McGinty's debut novel, Entropy, is an attention-grabbing tale of a future when things have gone from comfortable to terrible for principal character Bill Bartles, as well as the world he lives in. It is a fast-paced story of a man who is charged with looking at past events, stripping away all the static, and uploading what he filteres to a database contained in a space no bigger than a shoebox.

Entropy is a hard sci-fi, dystopian look at a grim future for humanity.

When I began reading Entropy, I found it commanding my attention. I was mesmerized by the story in its pages and whenever I had time to pick it up, I was drawn into a nightmarish world where chaos rules, and it's everyone for themselves.

I enjoyed Entropy. It ran me through an entire gamut of emotions, from being horrified, through sadness, and even some triumphant moments. It is an intense look into the future where there might be danger lurking around every corner. I had to pay attention because there were a few things I knew little about - at the same time, everything was adequately explained.

Bill Bartels lives in a city where life is strictly regulated. As long as one follows the rules, everything seems to work well, but going against established procedures have consequences. His life is quite comfortable - he lives in a nice apartment, has a girlfriend, and nearly everything he needs to live. He works near the bottom of a corporate ladder that goes very high. His job is to gather all human knowledge, sift it to be sure there is no spin left to taint the information, and finally store it on a device called the Infinity Drive. Bill does his job so well, he expects a promotion soon, but something goes wrong.

During a session taking a deep dive into the archives of the Infinity Drive's controller, he finds something disturbing. Outside the city is death and devastation, the result of numerous man-made disasters. In effect, Bill discovers a state of social entropy existing outside the city, and he is compelled to investigate. What compels him is that he is caught discovering forbidden information and the corporations do not want it to become common knowledge. He escapes the city and enters a world the likes of which he had no idea existed.

Along his journey, he discovers many disturbing facts and learns that humanity is doomed to end in the not-too-distant future.

For much of the tale, Bill is accompanied by an antisocial curmudgeon, simply known as The Thinker, who helps Bill with his decision if saving the dregs of humanity is worth the loss of the Infinity Drive.

The Thinker takes Bill on a tour of the ruined world and presents him with some disturbing looks into the realities of Social Entropy.

My favorite point of plot is the author’s illustration of the extremes between strict social control, and the lack thereof. It shows what can happen in two different worlds on the same planet when things are out of balance. It made me think of a lot of the things I witnessed during the height of the recent COVID Pandemic. How panicked people were hoarding supplies. How people began making their own rules and ignoring established laws. How people were behaving irrationally in general. Had things not calmed down, what might our world look today? I shudder to imagine it. We got a glimpse looking into an abyss, but Entropy takes it the rest of the way. It is not a world I would want to live in.

Another favorite point of plot was how the mood of the story changed in the blink of an eye. As the story opened, I felt as though I were reading a comedic story. There were things that struck me as being funny, but that didn't last long as the life of the principal character became unhinged as he became more aware of the realities of the world he lived in.

The overarching theme of Entropy is Social Entropy, as outlined by the second law of thermodynamics. My takeaway is an understanding of the concept of Social Entropy. When the constructs of living in communities break down, when there are no longer laws, in the absence of institutions that maintain order, society descends into chaos. It is a point at which irrationality rules and survival is the rule of the day. The strong survive at the expense of the weak. One example cited in my reading was what happens during war.

Entropy will make one think. It has a very familiar flavor in the light of headlines presented in the last few years. It takes the themes we have witnessed in reality and projects them into a future where it wasn't pulled back from the brink of tipping into disaster. We are still healing from the chaos witnessed during the pandemic, but this story gives us a look into what might be if some disaster, or combination of disasters, is left to follow its course. I see Entropy as a warning to societies telling us to take care of each other or we may face our own extinction.

I recommend this book to readers who like hard sci-fi and who enjoy post-apocalyptic and dystopian themed books. It is well thought out and disturbing. It caused me to have a few nightmares. While that may seem like a bad thing, perhaps it is just what we need to keep humanity moving in a positive direction. 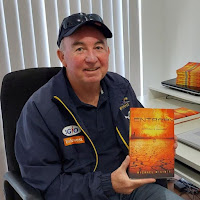 Mike was born and raised in Kalgoorlie, in the goldfields of Western Australia, before moving to Perth to complete a degree in Electronic Engineering. With a good science fiction book in hand and a lifelong passion for innovation, Mike has always imagined a future where technologies that are improbable today might be possible tomorrow. When not writing, Mike runs a software development company at cyinnovations.com, loves 1970s heavy rock music, and cheers on his beloved West Coast Eagles AFL team. And he often goes fishing in the Australian never-never. Together with his wife, Mike lives in an empty nest with their black Labrador, Louie.
Posted by Jim's Sci-Fi Blog at 8:47 AM